There is a scenario that Jesus shared once that has been called “The Friend of Midnight”. Luke (Bible writer) records the story in chapter 11 of his book if you want to read it for yourself. The story follows the “Lord’s Prayer” and is followed by the ask, seek, knock instructions about prayer that most Christians are pretty familiar with. Because of where the statement is situated in Luke’s writing, this is primarily talked about in the context of prayer, and rightfully so. There is, however, something significant to be gleaned about hospitality upon taking a closer look at the words Jesus shared.

It’s likely that if you read this story today, it begins with the phrase “suppose one of you…”. Just about every version of the Bible reads it that way. A better reading would probably be something like “can you imagine…”. Then as now, what follows a phrase like that is something extremely out of the ordinary or unthinkable. Jesus told a lot of parables that began that way. The phrase is intended to elicit a natural response of “No, I can’t imagine that”.

As American readers, it’s important that we do not project our way of living into this story or we put ourselves in jeopardy of missing the point. It doesn’t help us to imagine ourselves going to a friend’s at midnight asking for food to feed our friends who showed up unannounced in the wee hours of the morning. Our culture is very different. We don’t live in a culture characterized by honor as these people did.

In essences Jesus said: “Can you imagine going to a friends house at midnight, asking them to help you show hospitality to a guest, and having them say no because their door is locked and their kids are sleep?” The natural response for us as Americans is “Umm… Yea, I totally can. I’m not getting up at midnight to make food for YOUR friends who showed up to YOUR house.”

However, no first century Jew hearing or reading this story would have been able to imagine that a person would NOT get up and help the friend at their door. It would be unheard of for a person living in a culture characterized by hospitality and honor to turn away a friend who was in need regardless of the hour. 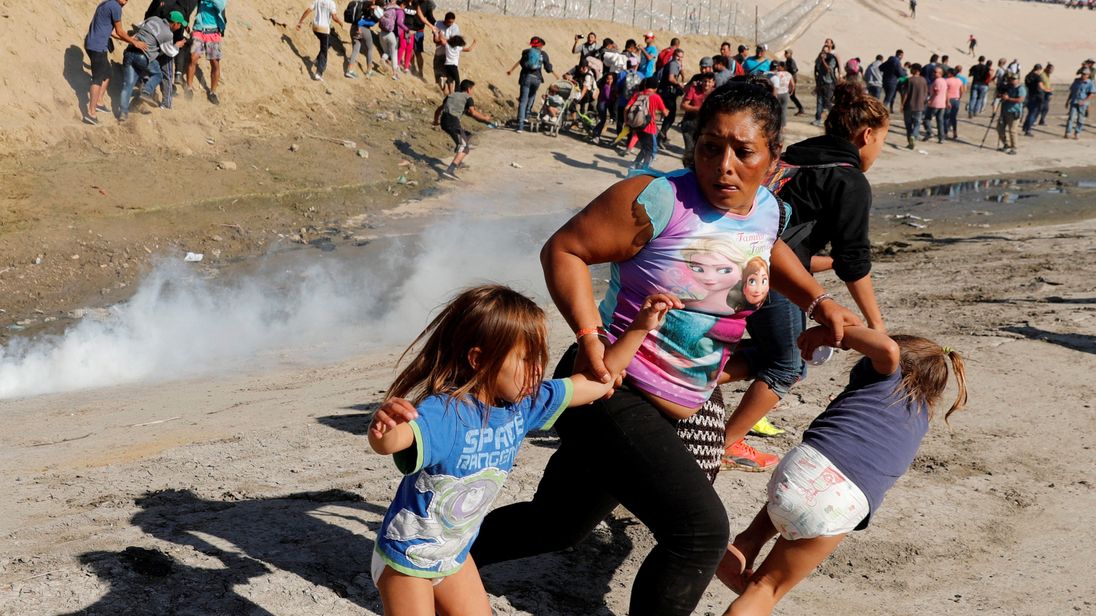 Who’s audacious at our borders right now? People who have walked thousands of miles to seek refuge, women and children seeking a better life for their family, or the people firing tear gas and pellets at them? I suppose the answer to that question depends on the value you place on honor.

I’ve been asked a couple times now what I would do with a stranger at my door. Would I just let anybody come into my house with my wife and my children? The question has been posed to me to suggest that I’m being hypocritical for criticizing the way we have treated and talked about this “migrant caravan”. I can tell you that for several months we’ve had a man with what we can only assume is a mental health disorder come and stand across the street from our house and hurl racial slurs at the four houses on our street. I’ve never once thrown anything at him, yelled back out my window or acted aggressively toward him. I only recently even called the police because after praying for him, I felt like he needed help and possibly to be reunited with his family. I’ve woken up mad, scared, and disturbed by this man a few times, but he’s a human being and deserves honor based on that alone. It’s audacious of him to yell obscenities at our house after midnight, but it’s perhaps more audacious of me to disregard his humanity because his illness inconveniences me.

But, that’s really beside the point. I don’t believe the discussion about how a Nation treats migrants should be reduced to an argument about how all of us treat our private residencies. The issue isn’t whether you or I invite strangers into our home, though I would hope that we would be willing to help a stranger in need rather than harming them or ignoring them. The point is that we as a Nation should honor human beings simply because they are human beings, and not treat them as pests. When you can see an image like the one above and your first thoughts are something about legal entry, MS13, rape or murder, then you have lost a sense of humanity. Some have claimed this image and others like it are left-wing manipulations designed to tug on the heartstrings of liberal snowflakes. I actually wish that was true. I’d rather believe that the media would sink to those levels than believe that we are capable of treating any human beings in such a calloused way. It’s also concerning that it seems that the only people with heart strings to tug on are liberal snow flakes.

Can you imagine a world where people can see an image of suffering human beings and their first inclination is to defend a position or political party? Unfortunately, I can.