Something I find really ironic is people being put off by churches or church leaders talking “politics” from the pulpit. I’ve heard people say things like: Jesus didn’t get involved in politics. Says the pastor who has 12 sermons on the “power of the cross” saved on their computer. We Christians sing songs about the cross, wear crosses on our necklaces, hang crosses from our rear view mirror, display them on our mantels and fire places… as the symbol of our salvation. However, before it was a symbol of redemption, it was a form of capital punishment reserved for political enemies of Rome. Jesus wasn’t stoned to death or murdered in the streets by a soldier or an angry religious leader. He was killed publicly to discourage any other enemy of the state from speaking of any “kingdom” that was powerful enough to usurp Rome. So, yes, I’d say Jesus was involved in politics.

The Jewish people walking the planet during the times of Jesus expected their Messiah to overthrow Roman government through military efforts like the “saviors” before him. Their interpretation of their ancient holy writings lead them to expect physical salvation as much as spiritual if not more. Political struggle has always been a part of the story of mankind, and the writers of the Jewish scriptures didn’t write in a political vacuum. They wrote in the middle of political struggles for supremacy. When John, a political exile, wrote his often misunderstood epic “Book of Revelation”, he was using art to elevate Jesus as the true Divine Emperor who would ultimately make right the injustice enacted by the unjust Roman Emperors. John followed in the footsteps of prophets like Isaiah when he wrote to the Jewish exiles:

“Your leaders are rebels, the companions of thieves. All of them love bribes and demand payoffs, but they refuse to defend the cause of orphans or fight for the rights of widows” Isa 1:23

Imagine hearing words like this at church on Sunday referring to POTUS or Congress. Chances are  you won’t hear anything like that this weekend at church, but if you’ve attended an Evangelical church over the last ten years or so you’ve probably heard “politics” from the pulpit. Here are the five topics I’ve heard, and chances are you have too.

I’ve sat in entire services dedicated to this one topic. It was done with sensitivity to any millennial democrats who may have been in the crowd, but the service and the sermon were both unapologetically anti-abortion. This is a topic that most Evangelicals have historically not been afraid to talk about. The killing of innocent babies inside the womb is an abomination and amongst the most heinous of all of Americas sins perpetrated by leftist sinners. Roe vs Wade was the beginning of America’s fall from God’s grace, and He will judge this nation for it’s horrible sin. That’s some of the rhetoric you’re likely to hear from an Evangelical church about abortion. I think we can all agree that life is sacred, and the taking of life, any life is deeply tragic. I’ve begun to wonder recently if these same Evangelicals are equally concerned about black and brown lives outside of the womb.

God made “Adam and Eve” not “Adam and Steve” I can’t tell you how many times I’ve heard that phrase. I’m not sure who coined it, but I hope they patented it. I’d be surprised if you haven’t heard the term “Biblical Marriage” at least once in the last year or so if you’ve gone consistently. That phrase denotes the marriage of a man to a woman. In recent years with the advent of “affirming churches” and homosexual pastors, there has been less and less full sermons or weekends about this topic, but sermon series about marriage and parenting rarely include language or principles that include same sex partners. The term “husband and wife” used throughout and on the images used for marketing and branding the series both reinforce the idea that same sex partners aren’t recognized as married in the churches or God’s eyes. Also, the majority of Evangelical churches have boundaries for where a person from the LBGTQ community can volunteer. I find the fact that few churches speak out as strongly as in years past about this issue interesting. Especially in light of the fact that ,outside of the afore mentioned affirming churches, most Christians still believe that living life together as same sex partners is a sin. Maybe it’s wisdom. Maybe it’s a growing sensitivity to the gay community. Maybe it’s a fear of polarization. Who knows. Though churches haven’t been as vocal in recent years, they haven’t avoided the issue.

Ten Commandments and Prayer in Schools

Chances are after a school shooting your church has prayed for the victims families and expressed sadness over the violence that claimed innocent life. Usually churches will stop short of talking about “gun control” as a possible solution for ridding our schools of violence, and will instead site the government’s decision to remove prayer and the Ten Commandments from schools.  As if once that happened God stopped caring about what happens to students and faculty in public schools. Again, you’ve probably not heard full sermons on this political topic, but it’s not something your church will avoid mentioning from time to time. Federal law prohibits vocal “disruptive” prayer in schools which is something that Christian churches have lamented since it became law in 1962. In 1990 a small group of students gathered on their campus before school at the flag pole for a time a prayer and scripture reading. Since then, millions of people gather every year on the fourth Wednesday of September for See You at the Pole. The youth pastor at your church and possibly the whole staff likely attended last year, and will again this fall.

I think if we’re all honest, none of us truly have a problem with our church talking politics. Our issue is with churches talking politics we don’t agree with. We applaud the pastor courageous enough to not be “politically correct” when that boldness is in line with our own sentiments. When was the last time you applauded your churches courageous stance you didn’t agree with? We don’t applaud the boldness. We applaud the alignment to our personal values. In my 35 years attending and working at churches, I’ve found that Evangelicals have been most vocal about social change when a democrat is President. It seemed as if America was on the precipus of total moral decay every minute a democrat sat in the Oval Office. I thought God was a republican until ten years ago, and apparently some people still do. I’ll never forget seeing this imaged posted on social media by a Christian artist the moment Trump was elected president. 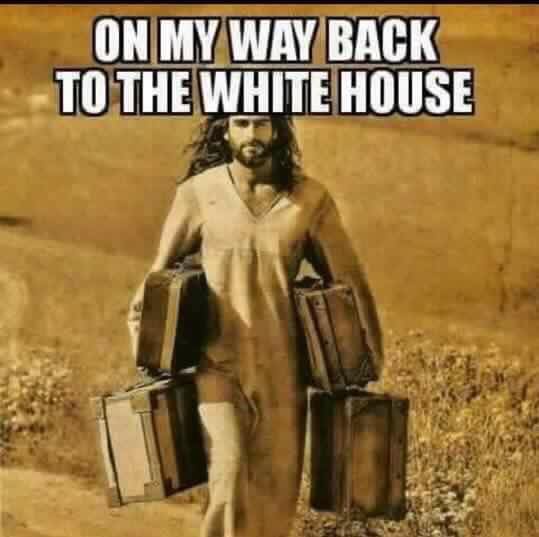 Apparently, Jesus wasn’t welcome in the White House under the previous administration. I guess he was avoiding being too political.

What has your experience been with politics in church?